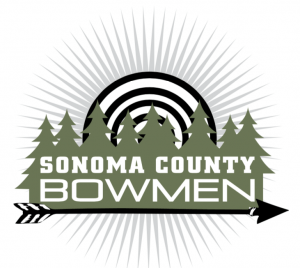 Organized archery in Sonoma County started around the 1950’s with a club called “White Feather Archery” and the first known archery range was located near what is now the Flamingo Hotel.  A new club was created in 1961 called, “Santa Rosa Bowmen” and their range was located on Sonoma County Water Agency property near Matanzas Creek Reservoir.  Another club called, “Sebastopol Bow Hunters” was also established in the 1960s.  These two clubs merged in 1971 to become a non-profit recreational organization under the name “Sonoma County Bowmen”.

The new Sonoma County Bowmen (“SCB”) moved its range to an old chicken house on private property near Forestville for about two years.  This facility was limited to indoor archery only and did not meet the needs of the club.  In 1973, the owner of Nielsen’s Christmas Tree Farm, located near the current Sutter Hospital on Chanate Road, agreed to allow SCB to use their property.  An outdoor range was established and remained in use for the next ten years.  The property was sold in 1983 forcing SCB to relocate again.  SCB was able to re-establish its range on its original location at the SCWA’s Matanzas Creek Reservoir site property later in 1983.  SCB used this site until the winter 2005/2006 storms.  The storms caused significant damage to the area and the Sonoma County Water Agency asked SCB to refrain from using the property until their sediment removal project was completed.  In June 2007, the SCWA notified SCB that it decided not to renew our license, which once again, left the club without a range.  In the interim, SCB President Marilyn Dutra and her husband, Steve Dutra, agreed to allow SCB to use their property so that the club could continue with almost all of its normal shooting and social events until a new range home could be found.  In April 2009, SCB signed a five year agreement with the Army Corp of Engineers at Lake Sonoma allowing SCB to once again – have a range “home”.